The Chamber and the Cross 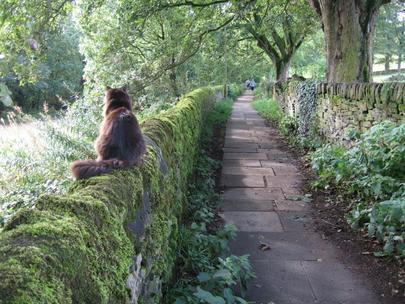 The CHAMBER AND THE CROSS is a contemporary thriller wrapped around a medieval romance.
News of her mother's mysterious death brings Laura back to England, and to Bannock Manor, a crumbling, stately home in the Cotswolds. The house and all its problems now belong to her. While attempting to replace antiquated plumbing, Laura uncovers a skeleton beneath the courtyard. The local villagers wonder if that explains the ghost who haunts the manor, but a more menacing intruder, one very much alive, is also lurking about the halls.
Todd Woodbridge, a university professor, is writing a book on the source of materials for medieval construction, and Bannock Manor is the perfect specimen. Unfortunately, time is running out, not only for the preservation of the house, but for the lives of its inhabitants.
Centuries before, Brian Bannock fought his way into a position of minor nobility. It was a time when nobles were moving out of fortified castles and into more comfortable and prestigious manor houses. He built Bannock Manor as part of his legacy, but his deepest desires eluded him.
In 1453, the Hundred Years’ War between England and France was over, but in England the Wars of the Roses had just begun. Lorraine Bonville, a young French girl, was caught up in political alliances that threatened her life. Forced to flee her chateau and cross the English Channel, the only thing she had left was a dowry of regrets. Her fate was tied to Lord Bannock, a man twenty-five years her senior, and to the beautiful manor house he built for her.
Jacques Dannes never belonged anywhere, or had anything, except the forbidden love of Lorraine. Theirs was a passion that lingered in the walls of the estate long after they were gone.
From castles in their full glory to the ruins of war, this novel weaves a beautiful tapestry of history, architecture, the struggle to rebuild life and love, and the desire to protect a very special home.

The Chamber and the Cross